The King James Only Controversy: Can You Trust Modern Translations? by James R. White 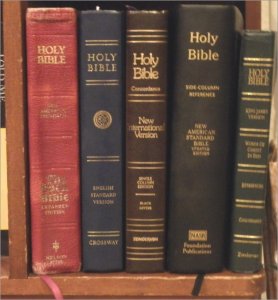 “I am sincerely convinced that if most Christians had a solid grasp on the history of the Bible, and were familiar with at least the broad outline of how translation is undertaken, the KJV Only issue would be more of a slight disagreement than a full-blown controversy.”

Do you have a favorite version of the Bible? If so, it may be your preference for a number of reasons: perhaps it’s the version you grew up reading, or you like the poetic or old-fashioned language it uses, or maybe you just find the language easier to understand than in other versions. For most people, choosing a Bible version to read and study is based on factors like these. For the most part, verses and passages I learned by heart were in the King James Version (KJV), but once I received a New American Standard Bible as a gift and began using that, I became used to it, and even when the pages were torn and falling out, I dreaded replacing it. Since then I have come to enjoy reading and comparing the Scriptures in different versions.

Some people have their reasons for preferring or only using the King James (also known as the 1611 Authorized) Version Bible. Dr. James White makes it clear that he has nothing against the KJV or people who like using it. But his book The King James Only Controversy focuses on that group of people who go beyond preference to insistence, to the point of considering all other translations as corrupt. These individuals believe that if you use other translations you are rejecting the true Word of God. People who hold to this extreme view are known as KJV Only advocates. White insists that even the translators of the KJV would disagree with this view. Read what the original translators wrote in the Preface of their 1611 text:

Translation it is that openeth the window, to let in the light; that breaketh the shell, that we may eat the kernel; that putteth aside the curtain, that we may look into the most Holy place…Indeed without translation into the vulgar [common] tongue, the unlearned are but like children at Jacob’s well (which is deep) [John 4:11] without a bucket or something to draw with…Now what can be more available thereto, than to deliver God’s book unto God’s people in a  tongue which they understand?

Elsewhere in the Preface, the translators state, “variety of translations is profitable for the finding out of the sense of the Scriptures.”

Some people may think this topic is trivial or too academic, but it really is helpful to understand at least a little about how the Bible came to be translated into English and the process that has been used to do so. It’s important to keep in mind that the process of translating the Bible into different languages is a human process and as such is subject to possible error. This holds true for the KJV as much as for other versions. Some people may be uncomfortable with this statement, but God did not promise that every human translation of His Word would be infallible. Every Bible translation contains what are called textual variants, including the KJV. White observes,

“The KJV that is carried by the average KJV Only advocate today looks very different than the edition that came off the press of Robert Barker in 1611. Not only do many printings of the KJV today lack the marginal notes and references, but the form of the text, and the wording of the text, has undergone change over time,” beginning as early as 1612 and occurring into the 1650s.

Where textual variants exist, there is reason to consider the possibility of errors. That’s why it is essential to hold ALL versions, including the KJV, to the standard of the original Greek and Hebrew manuscripts. In order to produce an accurate translation, it must be derived from these original texts.

Dr. White begins by providing a fair amount of detail about the early history of Bible translating and discussing the challenges of translating from the original Greek and Hebrew. To summarize, early Bible translations from the original manuscripts begin with Jerome in the 5th century. For over 1000 years, Jerome’s Latin translation, the Vulgate, was THE Bible used by everyone, so much so that later Latin was thought to be the language that God had used to preserve His Word. When Erasmus decided to publish the entire New Testament into Greek in 1516, he was opposed and labeled a heretic. Erasmus’ Greek New Testament became known as the textus receptus (TR) and was the text used by the KJV translators, but the KJV translators did not use only Erasmus’ Greek text. In fact, White points out, “If the KJV Only advocates were to be consistent, they would have to reject Erasmus’ work, which is the basis for the KJV, on the very same grounds as the modern translations.” It also should be kept in mind that the TR was used, not because it was necessarily the best, but because it was the most available at the time.

Next White explains the use of and differences between word-for-word translations and translation for meaning, and includes examples. He does go into some detail about text-types and families; some people may find this a little dry, but I found it interesting and helpful. The book provides a lot of background about when and where the various manuscript types originated and why textual variants exist. White describes to some extent the process modern scholars go through in studying, comparing, and translating ancient manuscripts. It is inevitable that human errors will occur in the production of handwritten copies, and White provides several examples of how this can easily happen.  This is why it is so important that multiple copies are referred to and compared when making a translation. White explains that disagreement amongst scholars shouldn’t give us cause to doubt the text we have in hand; on the contrary, disagreement and discussion “almost always lead to better insights and understandings.” KJV Onlyism disallows for this. 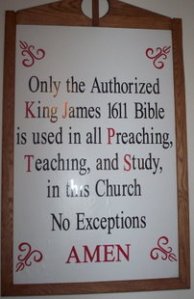 After giving some historical background and describing the process of translating the original manuscripts, White then discusses several outspoken King James Only advocates and the problems with their position and their writings. These writers include Gail Riplinger, author of New Age Bible Versions, and Dr. Peter Ruckman, who is associated with Pensacola Bible Institute. These individuals insist on holding tightly to the KJV for the sake of tradition more than anything – for the same reason that church held to the Vulgate and resisted new translations in the 15th and 16th centuries. They feel this gives people a sense of security, that they can be assured that the text is reliable. But this also undermines their personal responsibility to search and study the scriptures for themselves, or to be scholarly and true when dealing with the text. White provides examples of how these writers misrepresent and misquote scholars who defend the use of other versions, even resorting to name-calling, in order to promote their conspiracy theory that such men corrupt the Word of God. When errors are challenged and pointed out, they neglect to admit their mistakes. But they get away with it because their followers generally do not check their sources.

Peter Ruckman, who is among the most extreme and vocal in his position, claims that the 1611 Authorized Version “is the STANDARD that God set up whereby to judge all translations” (About the “New” King James Bible). In fact he believes this so strongly that he actually says that the Greek and Hebrew manuscripts should be revised so that they match the 1611 text, and then justifies this by claiming that mistakes that exist in the KJV are actually “advanced revelation”! (The Christian’s Handbook of Manuscript Evidence)

Have you ever wondered why certain verses or passages do not appear in some manuscripts? Were these passages deleted from the original? Dr. White submits that additions are just as dangerous as deletions. He explains that when the KJV includes a word or phrase that doesn’t appear in other modern versions, it doesn’t necessarily mean it was deleted by later translators. In some cases the phrase in the KJV was never there to begin with, but was apparently transferred or inserted by a scribe who was trying to be helpful or more thorough.

There are two major issues that KJV Only advocates claim are undermined in other versions: the 1) the deity of Christ, and 2) salvation by faith alone. But actually, in some cases modern translations testify to these essential truths more clearly, and by forbidding the use of other versions, KJV onlyism does a disservice by not making use of better translations to discuss these important doctrines with their opponents. Dr. White provides instances in which KJV Only advocates have dealt unfairly and inconsistently with the text by using a double standard and cherry-picking passages that they believe support their view, but ignoring others that could be used against them and disprove their point.

Some observations regarding the KJV that the KJV Only people don’t seem to consider:

Dr. White sums up the problems associated with the KJV Only position this way:

King James Onlyism is a human tradition. It has no basis in history. It has no foundation in fact. It is internally inconsistent, utilizing circular reasoning at its core, and involves the use of more double standards than almost any system of thought I have ever encountered.

The KJV translation has its share of problems; Dr. White provides many examples where the meaning is unclear or where the translators were inconsistent or made a poor choice when translating a particular word or phrase. As language changes and develops, it makes sense to update the language in the Bible to make it more accessible to the modern reader. For as White points out,

Why should we always have to have a dictionary at hand when reading the Bible? Why make reading the Scriptures a laborious task when simply translating them into our modern tongue would do just as well?…Utilizing terms that are no longer a part of our language has no place in making the Scriptures available to all people.

If you prefer the language of the KJV, by all means continue to use it. For those who like the language and flow of the KJV, the New King James is also a good choice. The translation is very close, but passages that are vague or unclear in the Old KJV have been revised for the sake of clarity.

The King James Only Controversy will be especially helpful to you if:

Dr. James R. White is the director of Alpha and Omega Ministries, a Christian apologetics organization based in Phoenix, Arizona.  He is the author of more than twenty books, a professor, an accomplished debater, and an elder of the Phoenix Reformed Baptist Church.

Note: This title is included on my list of non-fiction books I think every Christian should read.

2 thoughts on “Am I Using the Wrong Bible? : The King James Only Controversy”