Come, read to me some poem,
Some simple and heartfelt lay
That shall soothe this restless feeling,
And banish the thoughts of day.
– “The Day is Done” by Henry Wadsworth Longfellow

Recently my daughter came up to me with a book of poetry. She showed me a poem and asked, “How is this a poem, just because someone decided to break the sentences up in random places?” She’s taking a poetry class at college and when I asked her how it was going, she said it’s hard because the poetry they’re reading is “c–p,” as she put it. The teacher told the students that since they most likely studied the “old” (ie. dead) poets (ie. Longfellow, Dickinson, Tennyson, Kipling, the Romantics) in high school, they were going to do modern and contemporary poetry in this class. Then my daughter (unintentionally) gave me a compliment and said now she understood WHY those old poets are the ones I assigned when we were homeschooling. My daughter had a hard time understanding this modern poetry, couldn’t relate to it, and definitely didn’t seem to appreciate or enjoy reading it. 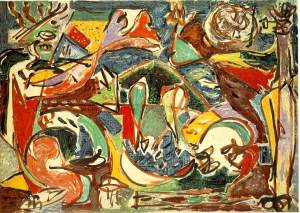 In his book How Should We Then Live?

Francis Schaeffer explains how the theological presuppositions and values of a society affect its culture. As the God of purpose, truth and order was gradually pushed off to the side, pessimism, doubt, fragmentation, and absurdity spread throughout modern society. Evidence of this is seen in the various disciplines, “from philosophy to art, to music, to general culture (the novel, poetry drama, films), and to theology.”

Some days I approximate a vacant lot.
Instead of fire I have a face—a solid
slow-flowing, a target’s white and heart
and near unhittable. There is no heat
or wavelength of radiance to reach me
in my assemblage of bones, the scaffold
that props me upright and adult. I leave
my name at home when I go out in crowds,
swallowing my blank, untutored tongue.
Some lies light, others shadow. My right hand shuns
the left, vocal cords divorce the lungs,
nerve endings split from the spine. From no one
nothing can be taken. I swear,
there’s someone home, but I don’t own her.

These works certainly reflect the sense of chaos, isolation, and meaninglessness so prevalent in society that has rejected the existence, or at least relevance, of God.

I don’t know about you, but I prefer the “old” poets any day. While they may sound a bit corny or use language that is no longer used, they are still understandable and accessible, even 200 years later. They write about subjects that transcend time, like family and work, love and war, beauty and nature, God and faith. They tell stories that touch the heart and move the soul. And call me narrow-minded, but I just like poetry that rhymes, or at least has some type of rhythm or meter, even if it’s blank-verse (unrhymed iambic pentameter).

Some of my personal favorite poets include Anne Bradstreet, George Herbert, John Milton and Robert Frost. But for now I’d like to focus on the New England poet, Henry Wadsworth Longfellow (1807-1882). An American college professor of literature, Longfellow has been called the “best loved poet of the 19th century.” He was the first American writer on native themes: American home, life, spirit, and history, and wrote other poems about the common subjects of friendship, nature, death, and work. He wrote several epic, historical narrative poems for which he is well-known: “Evangeline” (1847), “The Song of Hiawatha” (1855) and “The Courtship of Miles Standish” (1858). Probably more famous than any of these is “Paul Revere’s Ride” (1860).

My writer friend, Robert Leslie Palmer (author of Archibald Zwick and the Eight Towers) agreed to let me to share his comments about Longfellow’s poetry, since he expressed so well my own opinion about it. Robert says,

“Longfellow is one of my favorite poets, though he is no longer held in the same high esteem that he once was. During his lifetime, he was widely regarded as the greatest American poet, and his works were very popular. In the twentieth century, “scholars” began to criticize Longfellow harshly, causing him to fall from popularity.

“I happen to believe that poetry should speak to a broad audience and be understandable to anyone, not just a few self-appointed elites. I also happen to believe that “free verse” is not automatically preferable to more structured poetry. A good rhyme and meter scheme takes talent and real work, something that more modern “poets” lack.

“Longfellow has both the technical skill and the inspired heart necessary to write good poetry, poetry that moves the soul. His poetry addresses not only the deeply spiritual matters of life, but also many of the burning issues of his day. For example, one poem that moves me every time I read it is “Warning,” in which he personifies the entire institution of slavery as a modern Samson, and then, in the final verse, predicts the destruction that ultimately was wrought by the Civil War.

“Others may read their cherished twentieth century and twenty-first century American “poets” (i.e., so-called poets). As for me, I will continue reading the real American poets, those of the nineteenth century and earlier. Longfellow is among those who wrote real poetry.”

I agree, Robert. Longfellow’s poetry is much loved for its easy rhythm and rhyme, its beloved themes, and its ability to be easily understood. You can read some of my favorite Longfellow poems here. His narrative poems tell memorable stories of heroism, sacrifice and loyalty. In his lyric poems, he captures the love of home and family in poems such as “The Children’s Hour”:

From my study I see in the lamplight,
Descending the broad hall stair,
Grave Alice, and laughing Allegra,
And Edith with golden hair.

A whisper, and then a silence:
Yet I know by their merry eyes
They are plotting and planning together
To take me by surprise.

And he praises the work ethic of the common man in “The Village Blacksmith”:

Toiling,–rejoicing,–sorrowing,
Onward through life he goes;
Each morning sees some task begin,
Each evening sees it close
Something attempted, something done,
Has earned a night’s repose.

While Henry Wadsworth Longfellow may not have been an orthodox Christian (he was apparently a Unitarian), he is not to be read for his theology, but rather for the Christian values, ideals and character qualities that his works praise.

Stay, stay at home, my heart, and rest;
Home-keeping hearts are happiest,
For those that wander they know not where
Are full of trouble and full of care;
To stay at home is best.

By the way, I really recommend introducing children to poetry at a young age, and Longfellow has quite a few that are appropriate for school age kids, like the two I mentioned above. The earlier children are exposed to poetry, the easier it will be for them to learn to appreciate it. And be sure to READ IT ALOUD, especially when first getting used to poetry, or to a particular poet. Poetry is meant to be heard.

Which do you prefer – old poetry or modern? Do you have any favorite poets or poems?

Pilgrims Perspective
Wise in His Eyes

Book reviews and articles for women seeking to be wise in God's eyes.