Hymns of All Churches

I’m currently in the process of setting up a lending library for our church, which we are seeding with the many boxes of books we acquired when my father-in-law passed away several years ago. He had quite a collection of theological works, Bible study materials, commentary sets, and biographies, and we have discovered several gems, some of which are out of print and hard to acquire now. Along with theology, my father-in-law loved music. Today I came across an interesting little book entitled The Story of Fifty Hymns. There are several other similar books in his collection, but this one I found particularly interesting; I thought I would share the preface and I think you will understand. The full descriptive title of this little book is:

The Story of Fifty Hymns: Giving the Historical Facts, Purposes and Interesting Highlights of Fifty Hymns We All Love Best, Chosen from Many Hundreds of Hymns of the Protestant, Catholic and Jewish Faiths; Sung by Joe Emerson and His Fellow Artists on the “Hymns of All Churches” Program.

The first thing I found curious is that the book was published by General Mills (you know, the cereal company!), and that’s what prompted me to read the front matter. Read the story of this little collection for yourself.

On the morning of May 7, 1934, a group of artists and musicians headed by Joe Emerson, a nationally known figure in the radio world, started a program of morning hymns. Every faith was represented in these hymns.

Then came the inevitable question of obtaining a company to sponsor these programs, so that they might continue on the air without interruption. It was not an easy task to pick a sponsor worthy of so totally uncommercial a program. That is why Mr. Emerson requested his audience during the middle of May, to vote on a possible sponsor. People who had been enjoying these morning hymn programs, after carefully thinking of many fine old products and companies, wrote their choices to Joe Emerson. The final vote showed that Gold Medal “Kitchen-tested” Flour received the largest number of preferences by the audience. This company was then approached, and after consideration, accepted the sponsorship. On Monday morning, June 4, the first “Hymns of All Churches” program went on the air over WLW [in Cincinnati] under the new sponsorship of Gold Medal “Kitchen-tested” Flour.

Since that time, the response from ministers, priests, rabbis — and from thousands upon thousands of people from every walk of life — was so warm, so genuine, that the millers of Gold Medal “Kitchen-tested” Flour, who sponsor the program, realized that “Hymns of All Churches” had overnight become one of America’s great radio programs. 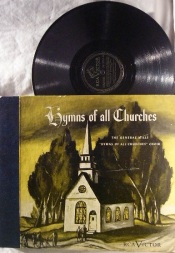 Over 8,000 ministers, priests and rabbis were contacted and given full information concerning the purpose of the program. A great many outstanding clergymen did almost an unheard of thing (as far as radio is concerned). They announced from the pulpit the name of the program and requested their people listen to it. The sponsors kept faith with the ideals of the program by keeping their advertising announcements down to an absolute minimum and by refusing to disturb the beauty and inspiration of the program with frequent advertising interruptions.

Mr. Emerson has been receiving hundreds upon hundreds of letters asking the same question: “Can you please send me a copy of the inspirational story concerning the hymn you sang this morning?” He went to his sponsors, Gold Medal, and asked them what could be done in answer to these appeals. The reply was brief and generous. Mr. Emerson was told to gather together the stories and words of fifty of the most beloved hymns which he and his fellow artists had sung on the program. “Print them in a book that will be a fitting tribute to the program and to the loyal audience of people who have been listening to you each morning,” was the instruction Mr. Emerson received.

The result is this beautifully bound book, “The Story of Fifty Hymns.” It was printed because you asked for it. And the program “Hymns of All Churches” is your program because you have told us in so many thousands of letters that these morning hymns start your day with a song in your heart.

The preface goes on to thank those who wrote to Emerson, and to those who contributed and helped in the preparation of the little book. It ends with an encouragement to the reader to continue listening to the radio program and to tell others about it. Here is the Table of Contents listing the 50 hymns in the book:

The “Hymns of All Churches” radio program ran from August 1935 to March 1947. During this period, the program ran 15 minutes, from two to five times weekly. Notice that at this time of our nation’s history, “all churches” was thought to consist primarily of Protestants, Catholics, and Jews. Although considered a melting pot of cultures by that time, clearly Muslim, Hindu, or other religions were much more in the minority than they are now.

Fast-forward 70 years: How many people today choose to start their day off listening to hymns of faith? And what major company would even consider sponsoring such a radio program or promote a book entitled, “The Story of Fifty Hymns”? Anyway, I just thought I’d share this little bit of radio history with you all.

Do you see one of your favorite hymns included in this collection?

This entry was posted in Random Musings and tagged general mills, Hymns of all churches, Joe Emerson, stories of hymns. Bookmark the permalink.