One Nation Under God

“Although traders, explorers and businessmen also had a hand in the founding of America, historical revisionists cannot erase the fact that the first people who founded colonies in this land were primarily religious nonconformists.”

The statement, “America is a Christian nation,” has become very controversial. One reason this is so is because I think people interpret what it means to be a Christian nation in different ways. I think most of us would agree that what we aren’t saying by that term is that we believe the majority of citizens are Christians. But another reason this statement is controversial is because secular historical revisionists have been on a mission for quite some time to suppress, distort, and completely erase, if possible, all evidence of the religious foundation of this country. In One Nation Under God, David Gibbs, President of the Christian Law Association, sets forth “Ten Things Every Christian Should Know about the Founding of America.” In his Forward to the book, Dr. D. James Kennedy asserts,

There is no doubt that this is a nation which was built upon the Christian faith — that the Lord, indeed, was the God of this nation, that it was founded upon the principles of God’s Word, upon the teachings of Christianity, and for the advancement of the Kingdom of Christ.

Gibbs explains that we are seeing more and more examples of religious discrimination and persecution against Christians in our schools, workplaces, and public places. How does he know this? As an attorney, Dr. Gibbs first began to represent and defend churches and individual Christians who were experiencing various types of religious discrimination over 30 years ago. It was for this purpose that he founded the Christian Law Association (CLA) as the number of cases continued to increase. According to the website, CLA receives more than 100,000 phone calls annually from Christians requesting legal help to practice their faith. That doesn’t include written correspondence pleading for help. In fact, the very liberties our founders came to this continent to preserve are today being threatened and gradually stripped from us.

In each of the first ten chapters Gibbs makes one statement then proceeds to give evidence and examples from original source documents and other scholarly resources to support his point. He also explains the importance of each.

With that in mind, I thought I would just list Gibbs’s 10 things every American (Christian or not!) should know, followed by a quote highlighting a main point. Note also that each of the ten statements contains a link to a separate article that I found on that subject.

[Columbus] said himself that the Lord gave him the vision to do what he did. And he added, ‘No one should be afraid to take on any enterprise in the name of our Savior, if it is right and if the purpose is purely for his holy service.’…Columbus felt the urgency from the Lord, not merely to open a new trade route, but also to bring the Gospel to the ends of the earth.

2. The Pilgrims clearly stated that they came to the New World to glorify God and to advance the Christian faith.

While adventurers came to the New World for a number of reasons, including commerce, American self-government began in a very large measure because of the desire of these religious dissidents to seek religious freedom and to base their civic lives together on the laws of God.

3. The Puritans created Bible-based commonwealths in order to practice a representative government that was modeled on their church covenants.

Without a doubt, the Puritans helped shape the future course of the American nation. It was both their theological and political practices, as well as their written agreements for self-government based on the Bible, that have had the greatest impact on America.

4. This nation was founded as a sanctuary for religious dissidents.

The Pilgrims, Puritans, Quakers, and other religious dissidents who founded settlements in the New World were seeking asylum from religious persecution. They were also seeking the opportunity to live in freedom under the laws of God in the American wilderness.

5. The education of the settlers and founders of America was uniquely Christian and Bible-based.

The American public school system was developed in 17th century Massachusetts so that children could learn to read the Bible. Virtually all the great colleges and universities of America were founded by Christians for Christian purposes. The Founding Fathers were imbued at these schools with a thoroughly Christian world-and-life-view that later permeated their politics.

6. A religious revival (The Great Awakening) was the key factor in uniting the separate pre-Revolutionary War colonies.

The Great Awakening touched the rural areas as well as the big cities. It cut across denominational lines, and broke any remaining strongholds of the Church of England. When individual Christians began to make independent decisions about what to believe and where to worship, a democratic spirit was created that helped lay the foundation for the American Revolution.

7. Many of the clergy in the American colonies, members of the Black Regiment, “preached liberty.”

The colonial pulpit was a major source of strength and inspiration both before and during the Revolutionary War for Independence. In particular, the ministers of New England played a pivotal role in calling for independence and for Godly resistance to British tyranny…Long before the general population understood the threat to American liberty, some colonial ministers saw what was coming and boldly spoke about it from their pulpits. Because of the color of their robes, these patriotic clergy were known as the Black Regiment.

8. Biblical Christianity was the driving force behind the key leaders of the American Revolution.

The greatest orator of the American Revolution, Patrick Henry, was a committed Christian, as was its greatest advocate, Sam Adams, and its greatest leader, George Washington… America was not founded by Deists; America was founded by Bible-believing Christians. Freedom in Christ led to political freedom, and only freedom in Christ will sustain political freedom.

9. Christianity played a significant role in the development of our nation’s birth certificate, the Declaration of Independence.

God provided the authority for drafting the Declaration of Independence. The Bible provided the principles that were proclaimed in that document…Many critics of Christianity’s influence in America like to point out that the Constitution does not mention God or the Bible. However,it was not necessary to mention God in the Constitution because it was the Declaration of Independence that declared for the new nation the foundational principles of freedom, justice and dependence on God.

10. The Biblical understanding of the sinfulness of man was the guiding principle behind the United States Constitution.

Perhaps the most important lesson Madison learned from his Princeton education was his firm belief in the Biblical doctrine of man’s inherent sinfulness. Because of man’s sin, government must institute a rigorous system of checks and balances to protect its citizens from tyranny.

The above are just some highlights from this book, which takes an in-depth look at the driving forces, principles, and men that played key parts in the founding of our nation. If you are not convinced that the United States was founded on Christian beliefs and principles, I simply ask that you read with an open, honest mind the articles linked to the above 10 statements, and consider getting a copy of this book. Below are some other books for you to consider. 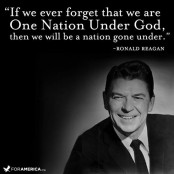 I believe the Christian heritage that our nation is blessed to have is something worth restoring, preserving and passing from one generation to the next. Sharing this book and these facts is just one small way I’ve chosen to help do that.

Do you consider America to be a Christian nation? Why or why not?