“Just as Luther spoke truth to power in his day, the contemporary church needs courageous spokespeople to identify specific abuses and offer positive solutions now to transform the church of today.” 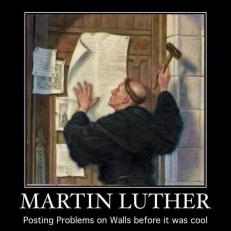 It’s amazing to think that 500 years ago, on October 31, 1517, a simple German monk unwittingly turned the world upside-down when he took some initiative and boldly posted a list of concerns he had about the church, 95 to be exact. David Steele‘s brief book entitled Bold Reformer looks back to the life and example of Martin Luther, whom God used to reform a corrupt and unbiblical religious system. The author contacted me through Goodreads and asked me if I’d read and review his book, sending me a free copy when I agreed. I initially thought Bold Reformer was a biography of Martin Luther, which it really isn’t. While it contains some biographical elements, the purpose of the book is primarily to bring forth helpful instruction and encouragement from the life and character of Luther to those who want to make a difference in the church today. For just as the 16th century church of Rome needed to be corrected and reformed, so the 21st century church of Christ needs a reformation.

The word reform is defined as the act of bringing about change for the better; to improve. Steele gives the definition of a reformer as “a catalyst to bring change… A reformer is not content with the status quo.” Looking around at what calls itself “Christianity” and organizations that label themselves as “churches,” there can be no doubt that change and improvement is much needed. Steele first identifies some of the areas in which the church needs to be reformed, then looks at some of the qualities and qualifications one needs to have in order to be a reformer for the benefit of Christ’s kingdom.

With these serious needs existing within the church comes the need for courageous leaders like Luther who are willing to speak the unadulterated, unwatered-down truth of God’s Word with power and without compromise – men and women who are willing to take risks and to be condemned and labeled as “intolerant bigots” or old-fashioned, close-minded fundamentalists.

God has become more and more a creature of man’s making, molded after the imagination and image of man, rather than the holy and sovereign God we read of in both the Old and New Testaments. Steele summarizes the solution by stating, “We need to recover our vision of God’s greatness, our thirst for God’s holiness, our passion for God’s glory, and our holy fear of [a holy] God.”

In order to effectively bring about reform, Steele points out that compromise must not be tolerated. Compromise takes place gradually, as the people of God begin to bend towards society’s mindset and to place more importance on feelings, comfort, and opinions (which change with each year and each generation), than on what God’s Word says (which never changes). Steele writes,

Compromise is ungodly. It is man-centered. It placates and caters to the flesh. It is opposed to the things of God. In our generation, compromise is viewed as a strength instead of a vice…Compromise may look right, but if left unchecked it always leads to disaster.

He observes that we can see the harm that has come from compromising the preaching of God’s Word, theology, the church, morality, among other areas. As compromise infiltrates and erodes the church, ultimately it becomes more like the world. In fact, it appears that the goal of many churches is to be like the world. Christ however taught that we are to be in the world but not of it, that as His followers we are to be separate and different from the world (John 15:18-19). Sometimes not being a compromiser may mean that you will find yourself swimming upstream, against the cultural tide. It will require commitment and risk-taking, as the first century apostles, Martin Luther, and other “bold reformers” through the centuries demonstrated by their lives.

Along with recognizing the need for reform and being will to be uncompromising with the truth, what else does it take to be a “bold reformer”? Here are some of the things Steele exhorts believers towards:

This is an age in which truth must be maintained zealously, vehemently, continually. Playing fast and loose, as many do, believing this today and that tomorrow, is the sure mark of children of wrath; but having received the truth, to hold fast the very form of it, as Paul bid Timothy to do, is one of the duties of heirs of Heaven.

Words that certainly hold true as much today as they did almost 100 years ago! David Steele’s book is not meant just for pastors, church leaders, evangelists and missionaries. It’s for anyone who desires to see the Gospel infiltrate and change individual lives, families, communities, and societies. He expresses his desire by saying,

In the day in which I am challenged for what I believe, I pray I am bold enough and willing to stand for God’s truth and say along with Luther,

I am bound to the Scriptures I have quoted and my conscience is captive to the Word of God. I cannot and I will not retract anything, since it is neither safe nor right to go against conscience. I cannot do otherwise. Here I stand. May God help me, Amen.